I'll explain why I'm studying wheels in my next post. But for now: I studied some wheels.

All 4in wheels of varying widths and materials. I got them in and measured their hubs and 5 had hubs that were large enough, and only 3 of those were reasonably priced or would work for me (2337T42,2337T35,2829T68). Interestingly, the wider the wheel got, the smaller the diameter of the hub...no idea why. I like the super soft tire (2243T22), but it was really rounded, and I'm planning on putting multiple tires on *ahem* something.

2 of the 3 wheels are mcmaster's "Rubber Wheel" series. They are black phenolic? hubs with black rubber tread. The other one is "Performance Rubber-Tread"...actually Colson Casters! Nylon or polypropylene? hub with grey tread.

The phenolic ones are easy to machine...not nice, but easy. Phenolic is probably the WORST smelling material I've ever tried to cut...mix of shit and rotting vegetation. In fact, I gave up after a few passes. Even though the wheels are a lot cheaper, it isn't worth dieing for...

So I tried the Colson. MUCH nicer. Super easy to cut, and NO smell. Found my wheel!
Posted by Jed Storey at 8:25 PM 1 comment:

While I really didn't have the time today, I decided to do a little work on EHB.

I finished designing the battery box: 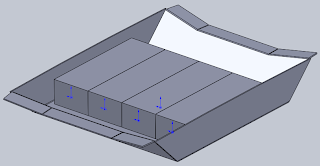 I used SolidWorks' sheet metal tools to design it. It's contoured to fit my deck. I plan on waterjetting it out of 1/16" 6061 aluminum. The battery packs are 4s1p 5000mAh Zippys.

I also did a pretty detailed mass calculation. It comes out to about 35lbs...which is annoying because I was shooting for < 30lbs. The motors are ~13lbs, and the batteries and battery box are ~5lbs. Unfortunately, the four kelly controllers weigh in at ~7lbs. Add in the deck and the trucks, and I get ~32lbs. Grrr...

So at this point, I have 2 options: Keep the current heavy configuration, or give in and make it 2WD (soo not as cool...). 2WD will save me about 9lbs, which brings the total down to ~26lbs.

I guess another option would be to suspend work on EHB and start LiteBoard. Though that would mean my $500+ investment in EHB parts would just be sitting around until LiteBoard is done...

We'll see what happens. Heck knows, at the rate things are going (I'm swamped), neither may get done by the time I graduate.
Posted by Jed Storey at 7:30 PM No comments: