Bad news. A bunch of my sensors aren't functioning. This means I'll have to break the motors open and either a. fix broken wire connections, b. reposition the sensors, or c. both.

That doesn't seem that bad, except the polycarbonate hubcaps have spiderweb cracks from the loctite and parts of them might disintegrate...which would be very bad. It would pretty much mean a redesign of the motor casings.

Since I don't really have time for the next few weeks to work on it directly, I've started designing custom LED lights for it.

That's all for now
Posted by Jed Storey at 1:17 AM No comments:

The build log is this Instructable. Feel free to ask questions about it in comments here or there.


Other projects included:
Here are some pics of those projects and of the Edgerton Center Summer 2010 Engineering and Design Class in general: 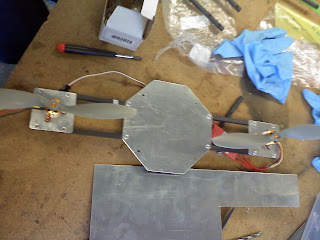 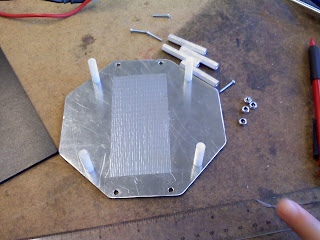 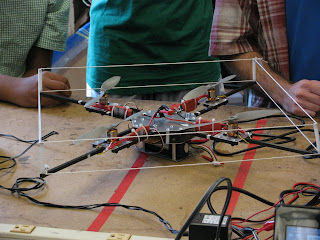 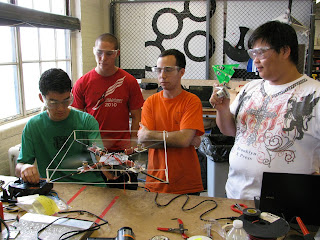 Believe it or not, the quadcopter actually flew. 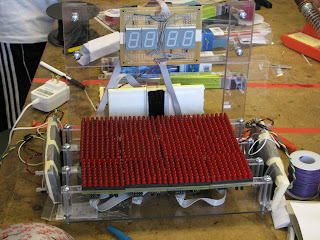 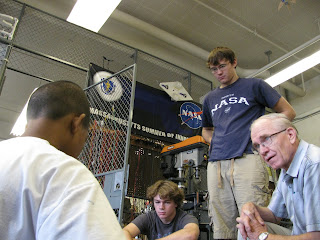 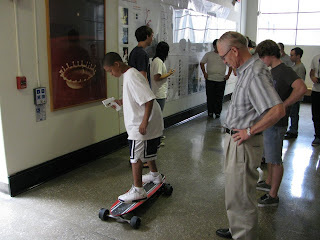 Shane's summary is here.
Posted by Jed Storey at 7:40 PM No comments:

Done for the Summer

Here are all the polycarb parts laid out in order (insert rotor in middle): 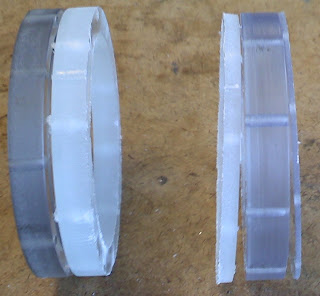 The waterjet didn't cut as cleanly as the lathe (duh), thus the cloudy white appearance. You can also sorta see in the 3/8" (left) spacer how nasty the small thru-holes are. I undersized all the holes in my waterjet drawing because I knew it couldn't cut them perfectly and I was planning on drilling them out later. Instead of cutting nice straight holes, though, it kinda just bubbled up inside and threw up some plastic out the otherside. Next time I need small holes cut in a piece I'm waterjetting I'll do the holes on a mill.

Anyways, here are all the polycarb parts stacked up. The waterjetted ones need to be drilled and cleaned up a bit, but that wasn't too bad. 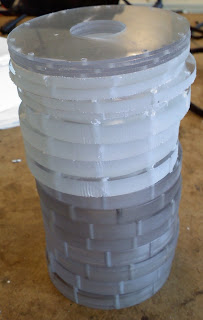 Next came skid plate work. I cut the basic size with a band saw, used a leveling surface and gauge to score lines parallel to the factory edges at the length/width I wanted, and then used a belt sander to even it all out. Then I marked all the screw hole locations. 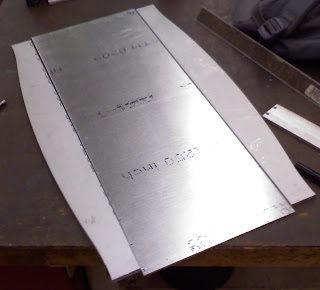 Next came drilling. I used a drill press because I was too lazy to set up a mill. I ended up off by a tiny bit on a few of them, so I just took an endmill and routed out the holes a little in the right direction. Then I countersunk the holes. 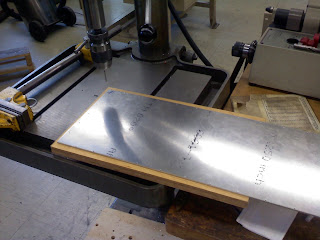 It turns out I was a little off (max. 3/16") on the curves in the CAD drawing I used for cutting out the sides:

Oh well, that can easily be filled with Blue RTV.

The next things that needed to be done were gluing/wiring the hall effect sensor boards:


Since each sensor had a power, ground, and phase pin, I could wire all the powers and grounds together and only have 5 wires to deal with. I did this by first bending the pins as in the picture below, and cutting to short pieces of solid copper wire: Then I soldered all the power pins to the bar: 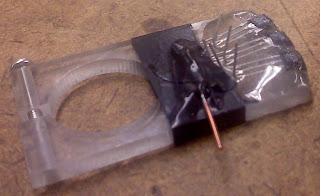 And all the ground pins to the next bar: 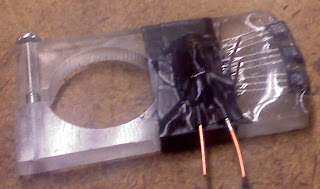 Then I just soldered on the wires:
Next came inserting all the stators into the rotors: 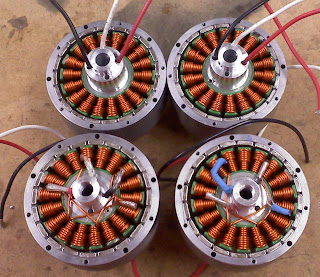 Then putting on the bearings and hall boards.
I needed to glue the 1/16" in-board hubcap bearing retainer plates to the inner-board hubcaps. I though that super glue would work... 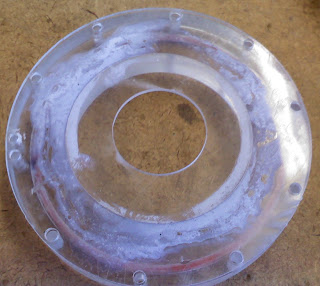 The next thing I made were the o-ring seals. I cut some 1/16" o-ring cord stock to length and superglued the ends together in the groove. Then greased them. This worked great. Unfortunately, I'm not really sure how useful they'll be. A strip of urethane tire will be glued to the outer surface of the motor, sealing the interface between the hubcaps and spacers. If water gets under the tire, sure it won't get into the motor between the hubcaps and spacers, but the interface between the rotors and spacers won't have a seal...so it looks like the o-rings were kinda extraneous (they look cool though): 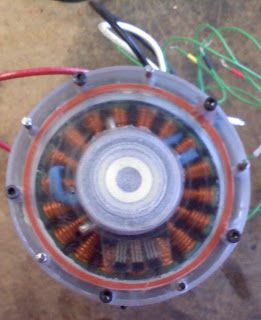 1st big problem: It turns out that the "1/2" inch sheet of polycarbonate I bought (and made the rear hubcaps out of) was closer to 7/16". This meant that the 1/2" wide in-board bearing had to stick out past the plane of the motor...which was now blocked by the superglued bearing retainer plates. Whoops...guess I shouldn't assume the thicknesses of my materials. grrr.... This meant I had to pry/chisel/sand/cut the stupid plates off:


Back to assembling:
Do you see the 2nd big problem? It has to do with that double hole I painstakingly drilled because I broke off a tap in the original hole in the rotor. See the dark smudge in the left (second) hole? Yeah...I broke the screw off in it. WTF. That's irony if I've ever seen it. It's ok though; 4 screws should be fine.

Ok, how about the 3rd big problem? It's visible in the pic above, but I'll give you a hint with the next pic: 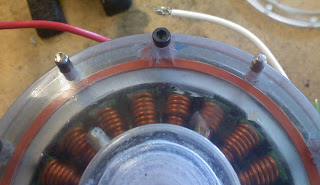 Polycarbonate and Loctite do NOT mix. I knew that loctite and acrylic didn't mix, but I had no idea about polycarb. I noticed these spiderweb cracks when I was halfway through the assembling the third motor. Better late than never, I guess... Yet another advantage to Charles' metal can methods. Any future hub motors I build will likely be some variation on his style. The motors should still be strong enough with the cracks because the screws are mostly providing compression, while the steel pins do most of the work.

At this point, the 4th big problem popped up. 2 of the motors had full shorts. Ahhhhhhh. I checked them all before I assembled them! Dis-assembly and inspection revealed the same problem in the same place in both. Epoxy on a sharp edge had chipped away underneath a wire causing the wire short to the stator. Luckily it was in an accessible place. I cut the wires, slid some heat shrink on, and re-soldered. It only took 3 hours...
I really really dislike these stators now. Aside from taking 4-5 months for them to come, the epoxy coating really sucks. Using fiberglass insulating end plates (like on the BWD scooter) would have prevented the problem, and I'll likely use that method with any future motors I build.

Next, I did some work on the MC and soldered the sensor connectors on: 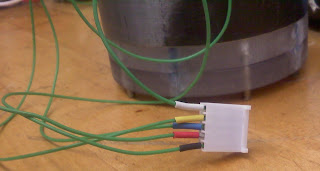 Then Shane and I  (mostly Shane) tried to match the motors to the controllers (takes a lot of trial and error with phase and sensor combinations). In comes big problem 5: Turns out one of the sensor wires in the first motor we tested has a bad connection...crap. I get to take it apart again...

Next came mounting the battery box to the deck. This required drilling 14 clearance holes for #10 screws in precise locations...on a curved deck. Yeah, I ended up drilling 1/4" holes as close to the right locations as I could get. It turned out well:

I decided that securing the sideplates directly to the deck with screws was unnecessary. I figured the screws in the endplates would be plenty.

And that's it for the summer. I got as far as I could, but I will have to continue in the fall.
Lessons learned:
1. Don't do small holes with a waterjet.
2. Measure all material...don't assume thicknesses.
3. Don't use superglue on polycarbonate if you want to see through it.
4. Loctite doesn't mix with polycarb or acrylic.
5. Use fiberglass endplates for stators when winding. Epoxy sucks.

In the meantime, I will be writing an Instructable for the ExcateCD (a modified Excate longboard that actually works...as opposed to the stock Excates that really don't work). It was one of the projects of the Summer 2010 Edgerton Engineering and Design Class (video)....yes, I have been working on TWO electric longboards for the past month. I'll also likely write up a few things here about the class. I didn't so much under-estimate the amount of time it would take me to finish my longboard, as underestimate how much time being a teacher of the class would take.

Now I'll leave you with a couple pictures of Shane destroying/performing surgery on/obliterating a MOSFET with a sawzall: 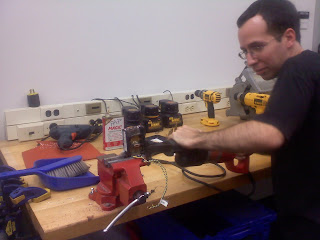 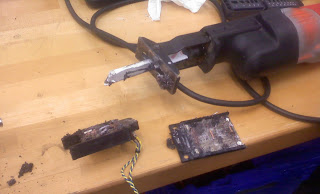 I took a break from motor work to waterjet stuff.
Remember how I hate acrylic?
I redid everything with polycarb:
I cut more alignment pins, too:
I also press-fit the rest of the hubs/stators:

Next, I did the mill work on the battery box sides and end pieces. This included lots of holes: 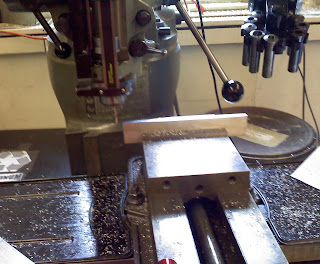 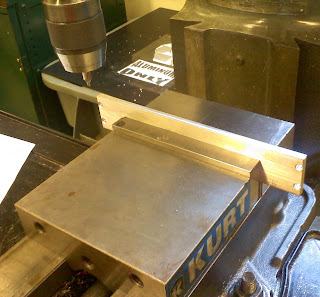 In retrospect, it would have been much easier to machine the battery box if the end pieces were between the sides, instead of the way it is now. The reason I designed it this way was so any frontal impact forces would not put sheer force on the bolts holding the ends/sides of the battery box together. Drilling the holes into the ends of the side pieces was far from trivial. The drill press table had to be swiveled to the exact location, then the piece had to be squared up and tightened down. Even then, the drill bit tracked badly, I think because the sides of the drill press table are not square. Anyways, it should be good enough...
I had two choice for skid plates. I order a 12X24" sheet of 1/8" aluminum and of .09" steel from Speedy Metals. After doing some math, it turned out I'd save about 2.5lbs by going with the aluminum. While the steel would have been a lot stronger, I thought the aluminum would be sufficient; if I were to hit something requiring the extra strength of the steel, I'd probably be in pretty bad shape anyways.
Stuff left to do on the battery box:
1. Drill and countersink the skid plate.
2. Tap lots of holes.
3. Figure out all component locations.
4. Mount to deck.
5. Seal/waterproof.
I finished winding the rest of the stators and gluing magnets into the rest of the rotors. I couldn't get the packing as tight with these three because their epoxy jobs were worse than the first one 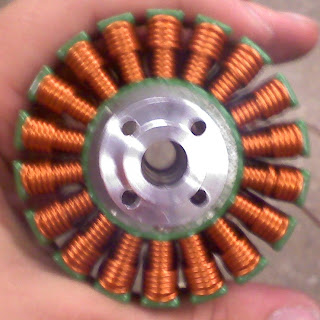 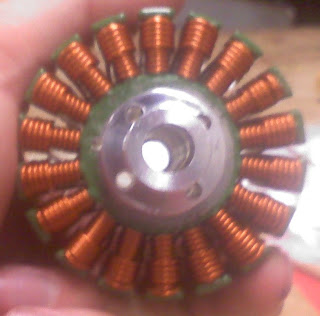 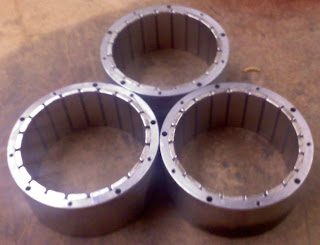