Damn my internet...typed up this entire post and lost it all. I'm not going to rewrite it all.

I finally sucked it up and rebuilt the eXKateCD (see previous posts for its story of misfortune). It has a Kelly KDS Controller, 9 new Lipos, wired hand throttle, and a KEYED battery selector that should prevent anyone we don't want from turning it on or plugging the battery in backwards. Check it out: 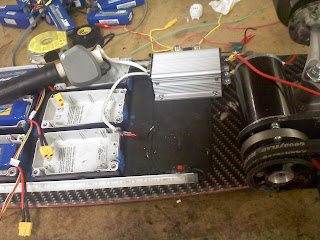 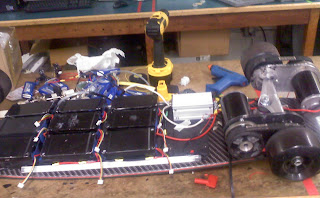 As it turns out, the KDS series of Kelly Controllers doesn't have Regenerative Braking, even though it is perfectly capable of doing regen. They just didn't include it in the software so they could charge twice as much for the series with regen....or they are so incompetent that they didn't realize they could easily make it do regen. Either way, the board doesn't have brakes, which is bad. A new motor controller will be designed/built for it (probably not by me considering all the other stuff I'm working on) that'll have wireless control via Xbee radio modules.


ELB Pics:
I thought I had more pics than this, but I couldn't find them.

Update: The motors are all but completed. Just waiting on more screws to come in from McMaster. I hope I didn't damage anything when taking them apart. One thing I did learn when taking them apart pertains to ball bearings. When designing an assembly with ball bearings, make sure to only have the bearing press-fit into one side of the assembly if the assembly is ever to be taken apart. Furthermore, make the press-fit the part of the assembly you want. Sounds obvious, but I never had to think about it before this. Two of the 2" bearings were semi-press fit onto the hub-shafts, making it impossible to get them off, thus making it impossible to press-fit them into the hubcaps. So I had to take the hubcaps to the machine shop and take a few thousandths off the bearing surface to make them a close fit instead of a press fit. Of course, none of this would have happened if I had just gone with aluminum hubcaps in the first place...

I'd say this project is 80-85% complete at this point. But with DBF, Rocket Team, and classes in full swing, the last little bit might take awhile.
Posted by Jed Storey at 5:08 PM No comments:

In other news:
I co-authored with Shane and Charles a paper that was accepted to the EVER '11 conference in Monaco!!!!!!!!!!

In other other news:
We got the 4th motor calibrated for ELB finally, after I replaced the sensors. Still no idea what was wrong with them. Anyways, this means I can start replacing hubcaps and finally finishing the motors. I'll have some pics of stuff when I find my microSD to SD card adapter.

That's all for now.
Posted by Jed Storey at 5:19 PM No comments:

Back in Cambridge. List of stuff I need to get done:

Still a lot left to do. This month is the 1 year anniversary of the beginning of this project. It shoulda been done 6 months ago, but I've been too busy and have had too many setbacks. Oh well.
Posted by Jed Storey at 7:25 AM No comments: