My activities this term

You may have noticed that the Electric Longboard project pace has slowed down significantly since the summer. This is due to the following activities:

1. Fall term Classes. I'm taking the Aero/Astro Core class(es) called Unified, which is basically one GIANT 48 unit bootcamp course covering thermo, fluids, structures, and signals/systems. This is in addition to other classes, including an advanced composites course (16.202) and German 2.

4. Design/Build/Fly. I'm doing DBF again. This is always a huge time commitment. Last year, while it only counted as a 6 unit UROP, I spent probably 18 units worth of time or more on it.


5. House Manager for my fraternity. Takes LOTs of time and effort.

ELB: The motors are in the process of getting internal Hall effect sensors. The method seems to be working well, so I plan on doing it to all of them, reassembling temporarily with the semi-busted polycarbonate hubcaps, testing/calibrating, then replacing the hubcaps with aluminum ones. The aluminum stock is in, so I should be able to start machining those soon.

eXKateCD: It is now the eXKateDB (exkate drill batteries). Let me explain. Someone (no idea who) came into the lab, saw it under the desk, probably tried to play with it, and left the Lipos plugged in. This drained the ENTIRE pack down to about 1V...yeah, Lipos don't like that; they're dead.

So while we wait for $160 worth of new batteries to come, I rigged this up: 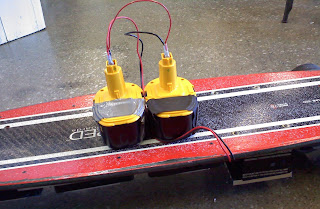 2 18V drill batteries in series. Not pretty, but no noticeable power loss, which is nice. Plus, we don't have to worry about these being drained all the way down (NiCD's actually like that). Our plan to prevent this from happening again is to have a keyed battery selector and hiding the key. I never wanted to have to do the 4 hours worth of soldering, etc. that it took to put the original Lipos in again, so I definitely don't want to have to do it a third time.

Good news: I took the sensor board out and tested it with a small magnet. The sensors were fine, they just weren't close enough to the magnets/coils. So I'm going to stick them in the slots of the stator and get rid of the sensor board. Even though they won't have the same angular separation as on the board, it will be a combination of slots that works, such as A(sensor)aAB(sensor)bBC(sensor)cCAaABbBCcC. I'm pretty sure I did a previous post on calculating hall effect sensor positions, or it's in my design review for this project, so look that up if you want to know where to place hall effect sensors. Anyways, this means that the sensor board cannot be adjusted, which is nice to have if you want to mess with timing. Oh well.


Bad news: Chips of the polycarbonate hub caps/spacers fell out. However, it wasn't the total disintegration I thought it would be. In fact, it's salvageable, so I may just put them back together the way they were. (I'll at least do one to test the sensors in the slots idea.) On the other hand, sidewalk cracks and other bumps might finish the disintegration process, which would be really bad while riding.

Another option is to make new hubcaps/spacers out of aluminum, but it wouldn't be see-through anymore. :(
I could waterjet new polycarb spacers and hubcaps, but I really don't want to deal with that again. Especially because it'll be impossible to get rid of every little molecule of loctite.

Another option is to shove the rotor into an aluminum pipe and make aluminum hub caps for the pipe, eliminating the spacers. Something like this:

The holes are filled with glued or pressed-in polycarbonate disks. I really like the way this looks, and I think it'll be much stronger than the current design (though the current design is plenty strong...). The larger diameter will give a slightly higher topspeed. One draw back with this is that the outer edge of the hub cap is now an important surface and has to be a very close fit for weather-proofing. In fact, the hubcap-outer tube interfaces would probably have to be sealed with silicon. Drilling radial holes is no easy task, and getting it apart would also be a pain.

Here's a combination of the above two options: 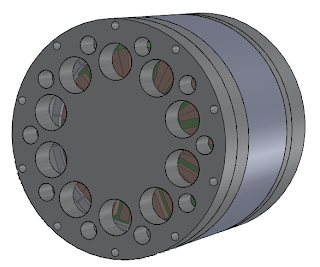 Aluminum hubcaps with polycarbonate inserts in the outer-side one. Keeps the current bolt pattern. Scraps the useless o-ring seal (explained in an earlier post). This allows partial see-through without the draw backs of polycarbonate (can't loctite, not as stiff).

I'm leaning towards the last one.
Posted by Jed Storey at 3:25 AM 3 comments: