Yeah...I haven't done anything on my boards. I got swept away by MIT's work load again. All my free time was spent leading the team that built this:

It's our plane from the DBF competition this year. I am an aerospace engineer after all...gotta build some things that fly :P .

About DBF:
DBF (Design/Build/Fly) is an international RC aircraft competition sponsored by Raytheon, Cessna, and the AIAA. Every year in September, a new set of rules/missions are released, and 60-80 teams design, build, and fly a plane for those rules. The contest site location alternates between Tuscon, AZ and Wichita, KS. 1 plane is allowed, and the missions are usually very different, making it a complicated design/optimization problem. Also, weight is usually a HUGE scoring factor (in some years it's been the only one that really matters). Also, lithium batteries are not allowed...It's like Flintstones meet the Jetsons in that regard (NiMH battery tech meets top-of-the-line composite technology).
The missions this year were to fly as many laps as you can in 4 minutes, carry 3.75lbs of aluminum block for 3 laps, and carry 2L of water up to 100m as fast as possible and then dump it.

About MIT DBF:
We're a small team (~12) undergraduates, usually with one or two graduate advisers who help out here and there. No profs at MIT have the time to devote to helping the team out, so we're really undergraduate run.

About our plane:
Unfortunately, I can't tell you very much about our plane because DBF is SUPER competitive, and a lot of how/what MIT DBF does is secret. I can tell you what you see in the pictures though. This plane is the product of a semesters worth of design/analysis, and a semesters worth of building. (for a reference length: it's wing span is about 1.4m). It has composite reinforced (various amounts of carbon fiber/fiberglass/Kevlar...I won't reveal weights or locations) foam wing and tails. The airfoils are very precise thanks to the CNC foam cutters the Aero/Astro department has. The fuselage is made out of a honeycomb/fiberglass composite; we CNC milled our molds in house for this fuselage, and developed our own manufacturing processes. The propulsion system is: NiMH battery pack, Castle Creations ESCs with Axi Gold brushless motors, and APC propellers (different props for different missions). 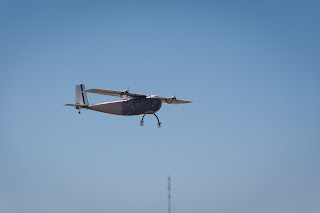 How the competition went:
Not well. Fucking tornadoes. I'll start from the beginning though: The plane made it to Wichita via freight no problem. It was SUPER windy every single day there. First day, we successfully completed Mission 1 (the speed mission) in the morning with 6 laps, at the end of which, an ESC fried (it was a bad one...we weren't anywhere near the amp limit). Then we decided to call it a day and go do Mission 2 flight testing at a small RC airfield nearby. The next morning we successfully completed Mission 2 (aluminum block passenger mission) in 20+mph winds. We were sitting in the top 5 at that point (top 3 if you didn't count the heavy planes that had already finished all 3 missions, but were way too heavy to place in the final top 5). Then we were waiting around for our next turn (they cycle through everyone for flight attempts) to do Mission 3 when they closed the flight line due to some rain and high (30ish) winds. It's unfortunate...we designed our plane to be very fast, so it could have handled the wind. Oh well, we decided to go back to the hotel and wait for tomorrow, the last competition day. That night, 90 tornadoes ripped through Kansas, out of those, 10 hit Wichita, and 1 happened to go right through the competition site, wrecking everything. They had to cancel the competition; no reschedule, nothing. We were super bummed: 1000's of man-hours and 1000's of dollars went into that plane. But we went back to the small airfield and completed Mission 3 (2L water dump mission) in ~40s in 35mph+ winds. We did the math...if we had completed Mission 3 in anywhere close to that time at the competition, we would have won. It sucks...a lot. The judges decided to get rid of the 3rd cycle of flights in the competition (the one we did M2 on), so we ended up in like 12th (because we only had one mission score...), or something. The places are total bullshit this year; 1/2 the teams never even flew, and the ones who placed high would have placed much lower had half the competition not been canceled.
I'm just glad Tuscon doesn't have tornadoes.


I'd like to thank the MIT Edgerton Center, the MIT AIAA Chapter, the MIT GEL Program, Lincoln Laboratories, the Department of Aeronautics and Astronautics, Aurora Flight Sciences, and Lockheed Martin for their support this year, and hopefully in many years to come!