Back to poor prints...and thermal troubleshooting

Well, it seems my print quality has plummeted after the nozzle clog. Bummer.

The only physical thing different between now (bad prints) and before (good prints) is ash in the nozzle threads and slightly tighter fitting PTFE tube (tighter to nozzle hole, hole for filament is the same). The nozzles are identical. I just have a hard time believing that that could have this big of an affect.

Notice how it looks smoother when the Z seam is aligned? What's happening is initial under extrusion at the start of every wall (perimeter), inner and outer. The inner wall under extrusion results in a gap about 10-20mm long on every layer, and the outer initial under extrusion causes the radius to gradual grow as the nozzle completes the circular movement. The final diameter is surprisingly consistent, but it's slightly under sized. There are also lots of zits on the side of one of the parts facing the other. I think these are where the nozzle passed during travel...not sure which direction, and the other part doesn't have any zits.

This is apparently a pretty common problem across many printers and slicers, but there are multiple possible causes.

Time for some test cases. 20mm diameter, 1.6mm (2 inside and outside walls) thick cylinders. 0.25mm layer height, 0.4mm wall thickness, 50 mm/s speed (cura makes outer wall speed half of that), no infill (solid perimeters). The inside walls are between the outside walls, which form the inner and outer diameter.

Analysis: You can see the gap caused by initial under extrusion. I managed to stop it at the beginning of an inner wall perimeter on the left, and you can see the blob-y inconsistent extrusion. No zits this time, not sure why. Maybe I'm retracting too much and not fast enough?

Analysis: This case had zits on the left one. They are from the oozing material as the nozzle traverses the distance from the right one to the left. Every layer deposits a blob onto the stack. A new stack starts when a new (random) z seam location is picked. Oddly, there are less zits on the right one. Not really sure why. I think I need the 2mm retract distance. The retraction speed seems to have not mattered. Note: It only retracts when traversing between the two cylinders. The initial under extrusion is more apparent with the Z seam not aligned. It looks like some locations have worse under extrusion that others, which is really odd. Also odd: the inner wall starts at the same location on the left one and leaves an impression on the outer wall, but it starts at different locations on the right one.

Analysis: I've never had to use initial prime amount before. It might have helped a little, but I don't think so. 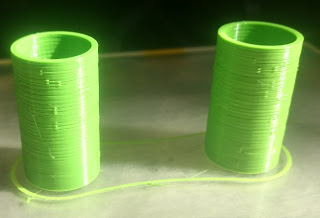 Analysis: Going slower helps a lot. I watched carefully this time. There is initial under extrusion at the start of every perimeter, but at the end of the perimeter, there is a blob, which is what the bumps are. So maybe its losing some material at the end of the perimeters that should be used at the start of the next one? It looks there's more under extrusion than the blob could account for though. Reducing the temperature (215 form ~10-15mm, 205 ~15-24mm) reduced the blob, but increased the under extrusion. 230 from ~24mm. Blobs increased, but underextrusion went back down. Then upped speed to 45 mm/s at ~30mm. Faster definitely makes underextrusion worse. Back to 225C 30 mm/s for 35-40mm.

I don't really understand the physical mechanism behind why this happens. I don't see any oozing or strings to indicate material is leaking out of the nozzle between moves (travel or otherwise). The inside perimeters are being printed first, and there is not a retraction between inside and outside walls, but both the start of inside and outside walls show underextrusion. Thus, I don't think it's necessarily retraction related, though that might make it worse.

I have a new heater block and another new nozzle coming. I'm going to replace both when they get here and see if this problem goes away.

I examined some of the extruder settings more carefully. Looks like it's actually using dead time with default value instead of PID, which is fine. My temperature fluctuations are about +/- 2 C, which is ok.

Another thing to note: The extrusion "feed rate" is actually the speed of the nozzle, i.e. XY feed rate. Extrusion rate is slaved to the XY feed rate. This is why "G1 X100 Y0 Z0.4 E5.2245 F3000" doesn't push 3000 mm/min (50mm/s) of 1.75mm filament into the extruder. It makes X move at 50 mm/s and the extruder stepper rate is calculated based on volume flow rate. Source. There is a max feed rate (again, XY feed rate, to which extruder is slaved) that the MK10 hot ends can sustain of about 65 mm/s at 0.3mm layer heights, or about 8-9 mm^3/s. Above that, they can't heat the filament fast enough and you get under extrusion.


Case 6:
225 C, retraction speed 60 mm/s, retraction distance 2mm, z-seam random, retract before outer wall disabled, initial prime amount off, speed 45 mm/s, extruder firmware settings: acceleration increased from 900 to 2000 (default is 5000), start feedrate from 20 to 1 (not sure what that is).


I think I'm stuck. I need to fix the thermal conductivity problem or this won't go away.


If replacing the heater block and nozzle works, lesson learned: good thermal conductivity between nozzle and heater block is a must.