I set up a long print for two of the Phi fan adapters. I checked on it every now and then, and it seemed fine, but I didn't look close enough...

What the hell...it's never layer shifted before. There goes about 20 m of filament. The shift was limited to the X-axis and seemed to happen randomly, but repetitively. The belts and motor are fine. I actually used repetier host to send G1 F9000 X200 command and then back to X0 multiple times to see if it was skipping on long travels. It was fine. So it's not mechanical. So what the heck is it. I set up a test case with two 25mm boxes at the maximum extents of the X axis build plate. It printed them fine up to 1cm. I then wondered what would happen if the X-axis limit switch was touched while it was moving to the left on the left side box, so I did that. It layer shifted! It just kept going, but moved about a cm to the right. In fact, it was far enough to engage the 200mm limit on the right half the x axis, so the right side had a layer that was squished in X. This is idiotic design. There is no conceivable circumstance in which continuing to print after a limit switch is engaged is a good idea. With real CNC machining equipment, if a limit switch is ever engaged, it means something went wrong and everything should immediately stop. I can just imagine the carnage if this was a CNC mill, the part was a big piece of steel, and it did this...*shudders*. I keep saying this over and over, but it's shit like this that shows that 3D printers are not precision machines.

As to what hit the X limit switch, I'm not entirely sure, but the only thing it could have been was the filament. The new spool holder is so friction-less that any torsion of the filament will wind more of it off...there was a single spiral of it above the print head when I noticed the layer shifted parts, but it didn't register as a potential cause. 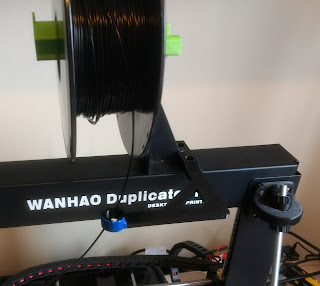 I printed it at 30 mm/s inner wall, 20 mm/s outer wall and top/bottoms, 40 mm/s infill, 0.3mm layer height. The extruder started occasionally skipping on long infill runs, so I think ~30-35 mm/s is maximum feed rate at 0.3mm layer height. There's a locking cup thing you can print for it, but a piece of tape (with some more covering sticky part in slot) works fine to hold the filament in.

Lesson learned: filament holders aren't just for guiding filament. They're for keeping it out of the way and off of your X axis. 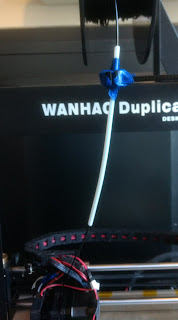 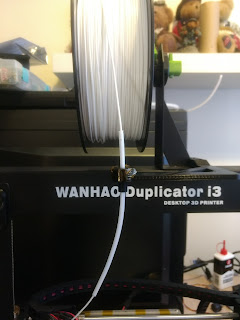