First, some successful prints. These were printed at 20 mm/s due to the aforementioned thermal problems. Despite some initial under extrusion at every layer, they came out great.

Bathtub Tugboat. This was made for a friend's kid. The files include a complete tugboat, a bottom part, and a top part. It's a very very nice model. The tugboat needs to be printed with 50% infill in the bottom for it to stay up right when floating. The problem is that Wanhao's Cura 2 does not have the option to change infill in different locations, and the swapatz plugin cannot be loaded. There are some hacks you can do to get different infills in different portions of your part, but since this came with the top and bottom part, I figured printing them separately would work. I then thought about how much extra filament filling at 50% would use...a lot. I calculated that it'd be cheaper to put some pennies in the bottom of the boat and fill at 10%, so that's what I did. Check it out: 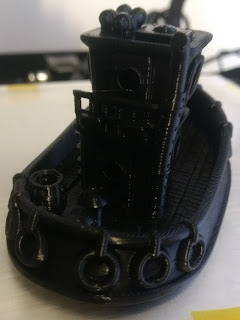 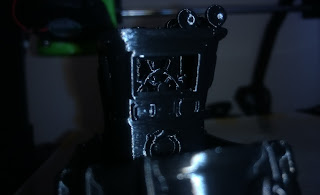 I also printed Roger from American Dad. Again, very impressive model, and it came out great. I used supports with this, which took quite a lot of time to remove from everywhere. Some of it got jammed in between his lips.

The new heat block came in today, too. On closer inspection, this "Wanhao MK10 heater block" was not a wanhao MK10 heater block. It had one M4 threaded hole, I guess for a threaded stud thermistor, the hole for the heater core was 6.5 mm (should be just a tad larger than 6.35), and it was 1 mm larger in length and width. It was purchased from tinlydscreations on eBay UK. I believe he is a Chinese reseller, but unlike most of the "UK based"/"UK shipping!" sellers, he actually runs the business from the UK. One way to distinguish those from the ones who (I think) just have a warehouse setup is that they offer "fast-n-free" shipping and the shipping estimate is a few days, not a week+. Despite the prices being slightly higher, it's worth it for the shorter shipping times and the customer service (he speaks English, haha). He was very responsive, and I'm happy with the resolution.

Since the old block's threads are caked with burnt plastic and was beyond saving, I figured out how to make the block I had on hand work. Since the original 2.5mm hole for the thermistor was a bit large, I drilled a 2mm hole as far as I could into the block without hitting the nozzle threads. That way the thermistor has the best chance of reading the actual nozzle temperature. At least that was the idea...I ended up knicking one of the threads, but hopefully no plastic leaks into the thermistor hole. Still, not bad for a hand drill. I used a larger bit to deburr the hole. 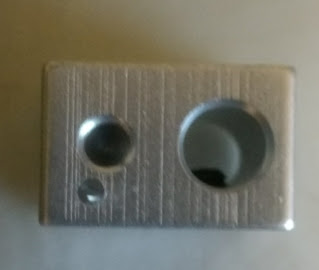 Next step was disassembling the old hot end. The old insulation was brown, and seems to have sort of burned/adhered to the old aluminum block, which is kind of concerning, but apparently common. Getting the stainless steel heat break/tube out of the heater block is tricky without a thin 5.5mm wrench/spanner. I had to wrap some pliers in paper and tape to keep from scaring it up.

I spent about an hour cleaning the gunk off/out of the nozzle and the stainless steel tube. The best method I've found to do that is to heat it up with a lighter (blue part of flame, yellow part is sooty), then stick something in there and wiggle it around and pull out gunk. Then when most of the big stuff is out, use cotton swaps in alcohol, small metal scraper like a needle, etc. to get the rest of the gunk out. The lighter trick works on the threads, too, then use a cloth to wipe up the gunk. I managed to get them pretty clean.

I figured out that the proper length of PTFE tubing is long enough to go from base of nozzle to tip of inside of stainless tube with just a tad of compression. If it's too long, it bends and filament gets stuck. If it's too short, it can shift around and cause filament oozing = bad. So I cut a new length and slowly trimmed it down until it was just right. I then tightened the nozzle on all the way (for maximum thermal contact area), then put the PTFE tube in and the stainless steel tube on and threaded it in. Then I tightened the tube with the paper pliers and a wrench on the heat block. The end of the tube presses up against the nozzle to form a semi-seal. Then I installed the thermistor. I didn't have a super short 4mm screw, so I had to use 4 washers, but I think it worked ok. 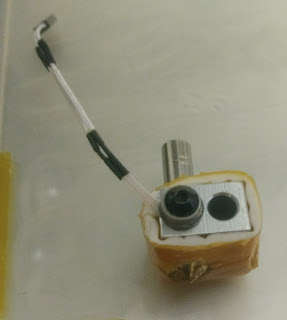 Re-insulating took about an hour because I wrapped all the sides in 2 layers. I put kapton on the inside of the insulation this time...should help prevent the browning/adhering to the block. I had to cut a flap for the set screw for the heater core, which I then taped back. I wrapped the heater core in about 2 layers of aluminum foil and installed that. 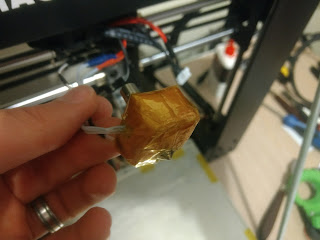 I checked tightness of the nozzle when I had heated up the block...seemed ok. Manual extrusion tests worked fine, so I reinstalled the DiiiCooler. It sits an angle this time for some reason...I'll try to shim it later. I really need to print the PETG one soon. This one is about 1/4 super glue now. Then I re-leveled the bed.

Then I was back in business. I'm running the heat bridge test right now. The goal is to be able to run at high speed (~40-50 mm/s) with the same quality I was getting before the clog, i.e. no blobs or initial underextrusion every layer.

Update: heat test done. It looks like ~200-205C will be a good temp for this black PLA at ~40 mm/s. That's down from before the hot end rebuild, so that's good. Unfortunately, the initial layer under extrusion problem remains. I'll have to think about what to do about that.
Posted by Jed Storey at 8:40 PM