I printed an Apollo astronaut. 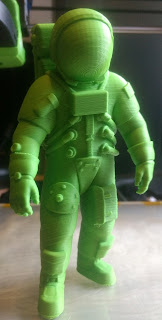 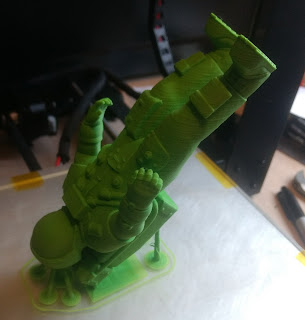 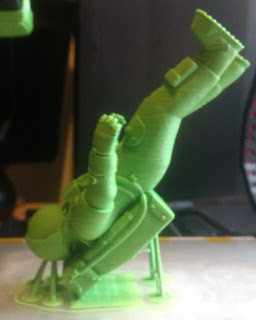 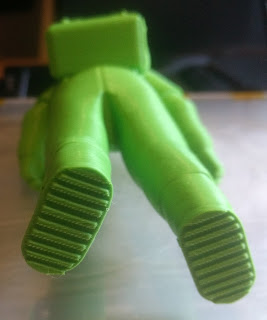 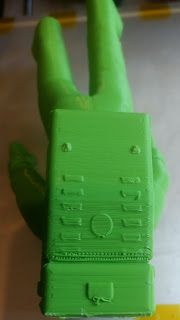 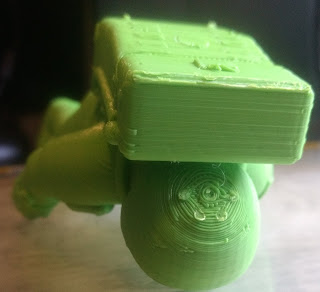 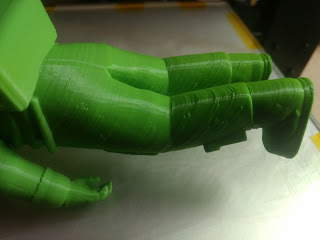 You can see in the above pictures that it isn't perfect, but I think it's pretty good. Parts of the backpack were printed at almost 90 deg overhang with no support, so it's not surprising that that's the worst spot. The back of the helmet was pointed down, and wasn't fully supported either. The only potentially preventable flaw I see is the weird over-extrusion at the start of layers thing. It's apparent on the corner of the backpack and on the legs. I still haven't solved this. Some prints are worse than others...seems to be pretty random. Retract before outer layer doesn't seem to make it go away entirely.

I also started printing some parts for my Xeon Phi testing project.

The inlet adapter funnels the air from an 80mm axial fan into the Phi. It also splits the flow path into primary and secondary flows with approximately the correct proportion (according to the Phi datasheet). The exit adapter funnels the exit flow into a ~50mm tube, which will connect to a custom venturi flow meter that is printing now. The goal is characterize pressure drop and flow rates to determine which fans will work. There is a lot of design work and details I'm glossing over; that will all be in a dedicated post later. This post is just about 3D prints. I think these came out really nice.

The hex nut pockets are tricky. I have them oversized on the width by 0.1mm. This results in a light press fit on my printer. However, any pressure on the screw will pop them out. I don't want to make them much tighter because getting them into place becomes more difficult, especially the ones inside the phi interface part. I went with nuts because I didn't want to deal with heated press-in inserts, and thread-in inserts are huge. I think I may try super-gluing the nuts in.

I'm also testing how loctite and PLA get along. If you go back to one of my ELB posts, you'll see what loctite can do to polycarbonate. I've heard it also eats acrylic. I put a drop of it on a trash PLA print and left it out. So far (~24 hours), the loctite has bled into groves from the layers and traveled about 40mm, but I haven't noticed any structural weakening yet, which is good.
Posted by Jed Storey at 6:43 AM